Last week I needed to open about 100 image files and simply crop them, all in the same manner. I was making a video panning through the z-axis of a set of 3D scanning electron microscopy images and just needed them to be focused in closer on more detail. Opening and closing 100 image files and cropping them was going to take time – so instead I decided to let Photoshop do the work for me and embraced batch processing!

How this works, is you create an action (like cropping an image or changing the image color mode from RGB to CMYK or something simple like that), apply it to a folder of files, and Photoshop magically performs that action on that entire folder – saving them under whatever naming system you desire. Thus my hour-long task was now just a five minute task. So worth it! Note that the action needs to be the exact same for each file. For instance, you can’t tell it to crop in a different areas of an image. But this works really well for mindless tasks like changing resolution from x to x, or just saving all the files under a new naming convention. Below is the process for creating an action and activating Batch processing – now get batching!

Step One: Create an Action

Go up to “Window” and Select “Actions”.

You’ll see a panel pop up with lots of options for pre-recorded actions, but you’re going to be making your own. 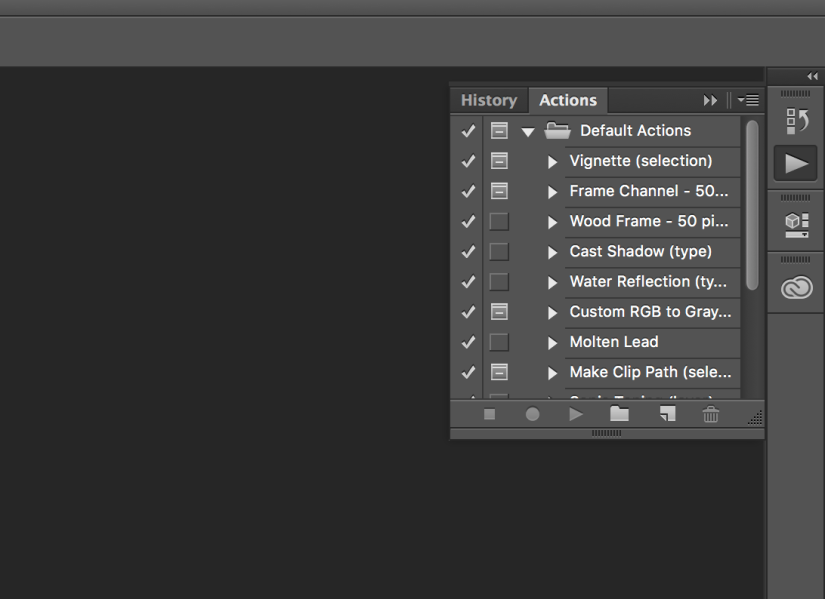 Select the “Create New Action” icon on the lower right.

Name it something you’ll remember and press record.

Now be careful – every move you make in Photoshop is being recorded – so now isn’t the time to try experimenting. You can tell you are recording because the action window will show a red dot.

So let’s get started! First we want to open up one of the images we want to edit. It works best if you go ahead and put together a folder full of the images you want to edit – make sure you have originals of these files in a safe place! Don’t edit originals. Here, I’ve created a folder of EM images and opened one in which I’m going to make the canvas size smaller. So I can go up and select canvas size…

And then make the setting which I want applied to all my images.

And you’ll note that under my action in the Actions panel, it shows that I want it to open a file and then apply this canvas size change. 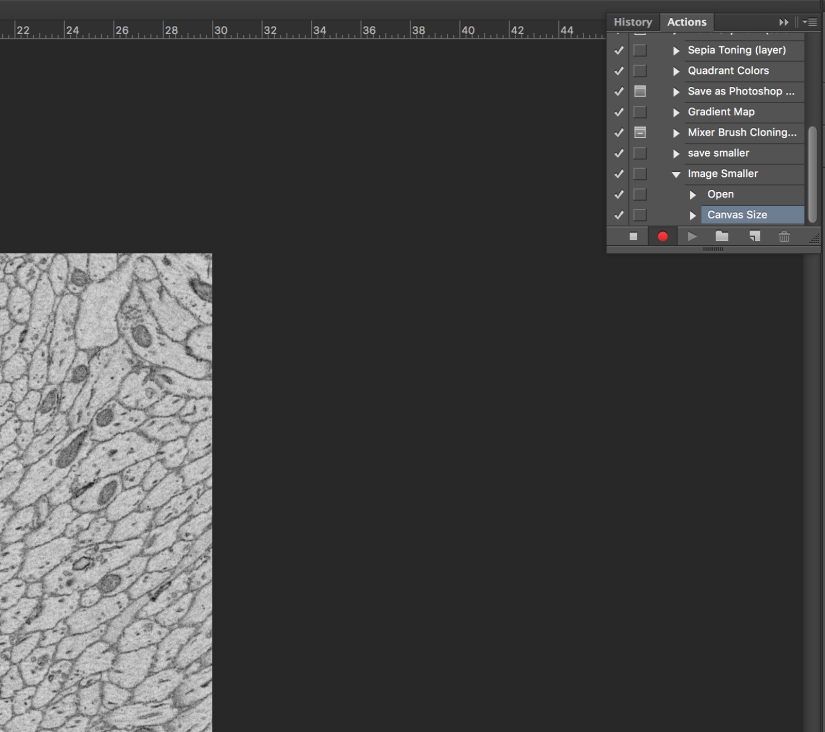 Next I want to save my image using a standard convention. 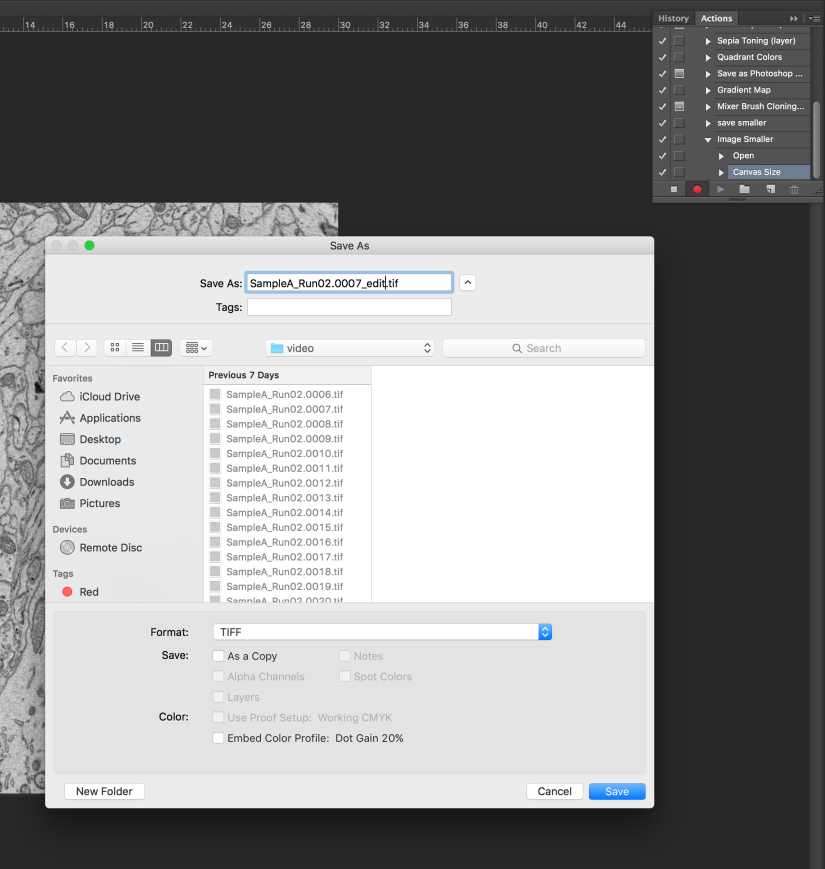 And then I’ll close the image.

This is all I want this action to do. So I’m going to hit the square “Stop” button.

Now this action is ready for use! 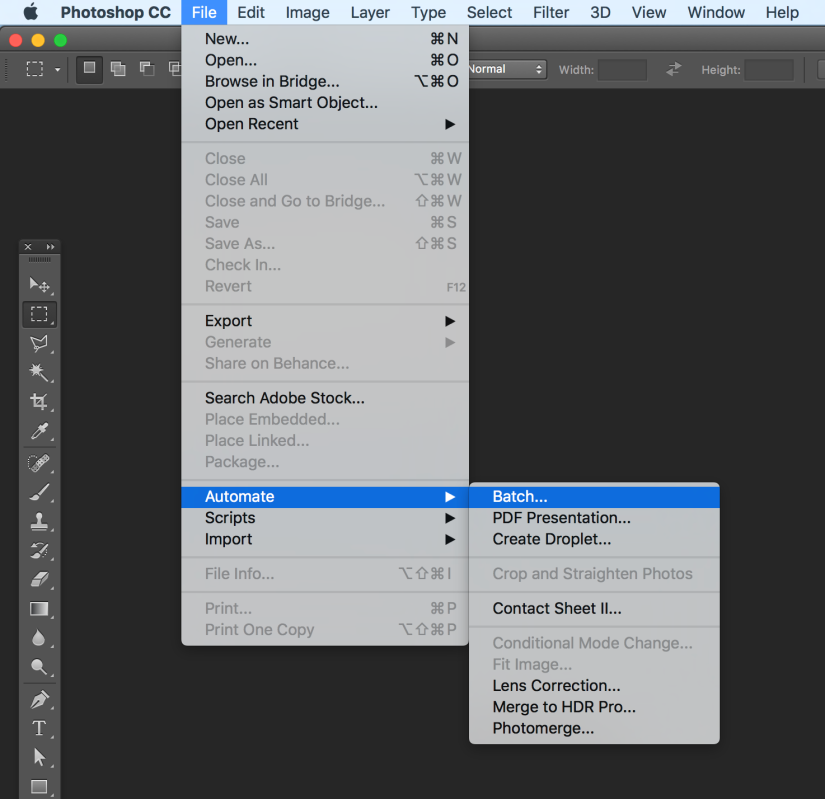 And a window pops up with seemingly lots of options. You’ll see the second left dropdown menu allows you to select the action you just made. Then you can select the source folder that has all of your images ready for editing. 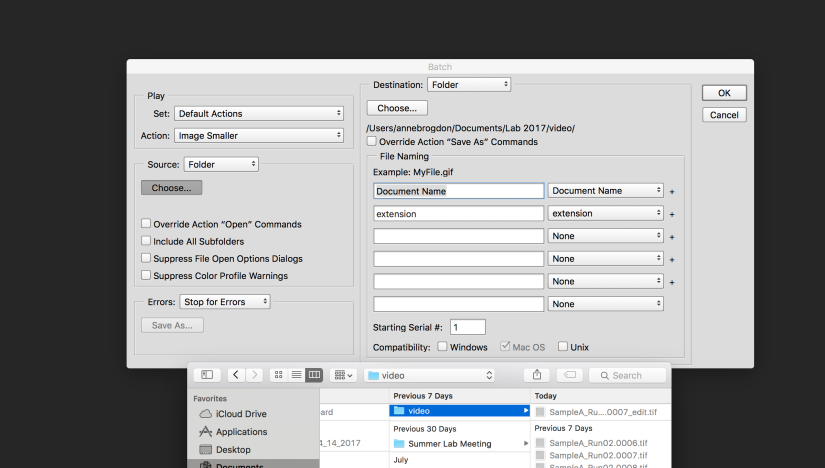 And then on the right you just need to select your destination folder where Photoshop will output all of the newly edited images. Here you can also select a new document name if you like, or add any sort of extension to the name, like “edit” or a number. 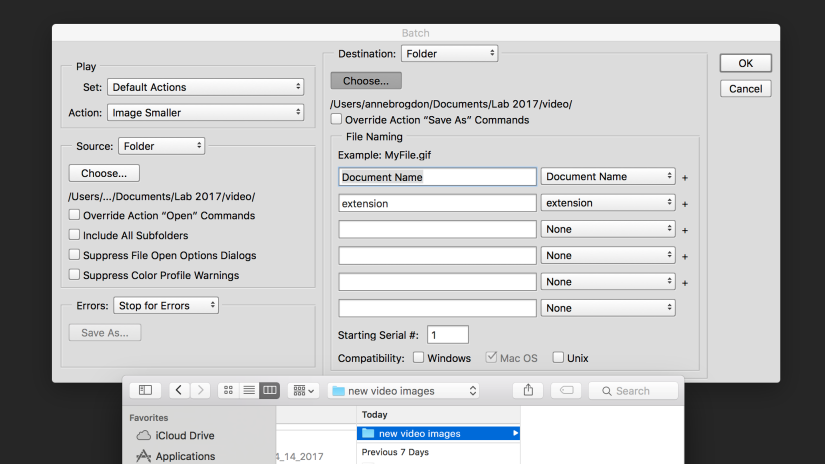 And then hit ok and Photoshop will become a blinking mass of rapidly opening, editing, and closing files. And after a few minutes – depending on the number of images – voila! You’re done!

Creator and Founder of Vizsi. View all posts by Anne